Today in this mini reviews post three different books are about to be discussed.

There’s one that’s supposed to be a funny comic, one that’s a fun and easy approach that helps people learn about gender and the different identities one can have, and the last one is a self-help book that gives tips on brainstorming by yourself.

‘Stop Looking at Your Phone’ by Son of Alan 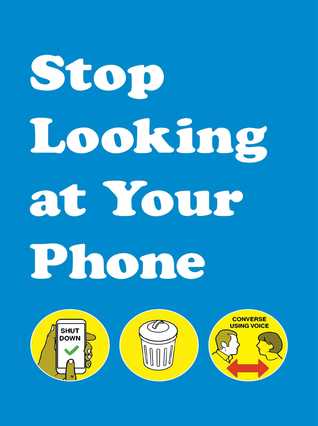 I don’t really get the point of this book. I mean, of course I understand the meaning, what’s more I agree with it and support it: yes, we should pay way less attention to our phones and way more to our surroundings! But this book was supposed to be funny, and even a ‘helpful guide’ – and none of it was it, really.
It started out good, I liked the introduction and at first I did believe it was going to be funny, but it turned out a bit boring and very repetitive. I get the joke, but I missed some more verbal entertainment along with the drawings. I actually kind of imagined a stand-up comedy style performance of someone witty and fun, with these pictures projected somewhere in the background, switching at the right times. That way, this would be awesome. The way this book is composed (very similar pictures, no text) it just wasn’t.

I rated this book 2 stars.

I got this book from Andrews McMeel Publishing and NetGalley in exchange for my honest and unbiased opinion. 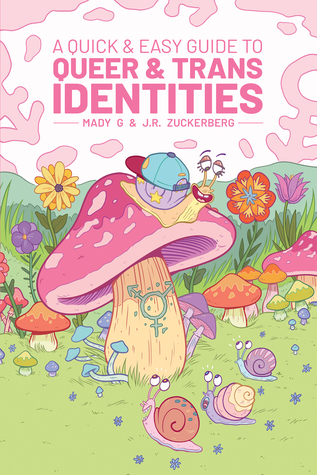 I was very interested in this book, because I have to admit that I lack some information on the subject. I’d like to be informed, and I’m far from bigoted (so is most of my closer environment), but the LGBTQ+ community here is way more closed up here than in e.g. the U.S. I know there are people that make their life harder everywhere in the world, but here it’s very much a taboo. Mostly people simply don’t talk about it at all. Sure, gay, lesbian, trans are all part of the everyday language people use, and most of them are more or less aware of the meaning of these terms, but for example gender fluidity and more complicated stuff are something most people here I think don’t understand, many don’t even know it exists. What I want to say is that the awareness here is basically non-existant (unless your a student from a bigger city or spend half your life on the internet).

That being said, I think it’s time to talk about the book itself. I wanted to get some information in an easy, understandable way, and it succeeded at that. I was reading about a lot of things I already knew, some that I had known of but never fully understood. It was quick and fun learning. I have to admit, though, that I’m not sure which age group this book is aimed at. It’s actually recommended to anyone interested in or influenced by the subject, but I’m not sure I agree with that. It’s a very sweet and easily understandable beginner’s guide, but I ended up with more questions than I had at the start by the time I finished. It raises interest, emphasizes accepting, empathy and understanding, it explains some basic things. However, the proportions are a bit off in my opinion. A huge part of the book consists of general advice on having and maintaining a healthy relationship, which is awesome, but it was 1. only relatable to very young, inexperienced people, and 2. not at all specific to LGBTQIA+ people.

The illustrations were cute, I loved the snails and ‘sproutlings’, though in general I think it would’ve been alright with people. They were lovely, though. The rose/pink predominant coloring bothered me a bit, not only because I myself don’t really like that color, but also because it felt like too one-sided. The book is about how colorful and amazingly different people are – I think something more colorful, a whole illustration in different colors, a world of rainbow would’ve been a better match.

I gave this book 3 stars.

I got this book from Oni Press/Limerence Press via NetGalley in exchange for an honest review.

‘Me, Myself & Ideas: The Ultimate Guide to Brainstorming Solo’ by Carrie Anton, Jessica Nordskog 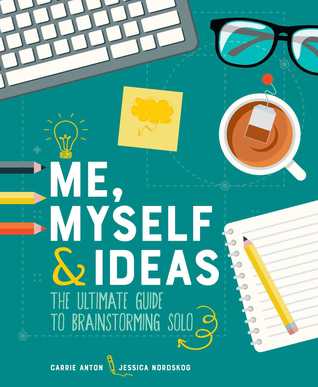 I have to admit that it took me way more time than just 1 hour to read this one. I’m not sure it was so much more put all the time I spent with it together, but I simply couldn’t read it in one sitting. Not that it’s long, or hard to digest. It’s not. But I expected something light and inspiring, and I’m not sure that’s what I got. In a way, yes, it’s exactly that: there are relatively short texts and many things are explained via illustrations, and the aim is clearly to give step by step tips to inspire creativity. However, it felt hard to concentrate on it after a while. I don’t know if it’s the style or the length or the fact that I’m not completely sure creativity works this way, but I didn’t feel inspired to wanting to have ideas at all. I just wanted to stop reading and doing something else – or simply reading something else.

It does not mean that I found this book completely useless! There are tips and methods I really think would be helpful when someone’s (even I’m) stuck and needs to speed up their brain, but in general I think it’s suitable for a ‘save the day when I’ m not in the mood for ideas, yet I have to come up with something very soon’ situation, and not an everyday method to use for having genius ideas. And, at least considering the people I see around me in my life, most of the tips are only working when you have an incredible amount of free time on your hand – which is something most people don’t.

Anyways, I gave this book 3 stars, as in maybe I recommend it – because there are a couple of useful tips, and it might work better for some people than for me.

I got this book from Andrews McMeel Publishing via NetGalley in exchange for my honest and unbiased opinion.

This is it for today. If you have any thoughts, I’d love to have a discussion in the comments section!