Last week my blog was one of the many stops on the ‘The Saxon Wolves’ tour, and as I said then, the story seemed to form a unity with the sequel (not so much because of a cliffhanger, but because it’s basically one story arc), and that made me want to read it forward right away.

Here’s my review of the sequel, ‘The Saxon Plague’! Since the two are essentially one story, it has many points that says the same I’ve already written about the first book in the series, and it’s not very long, but here it is anyway! 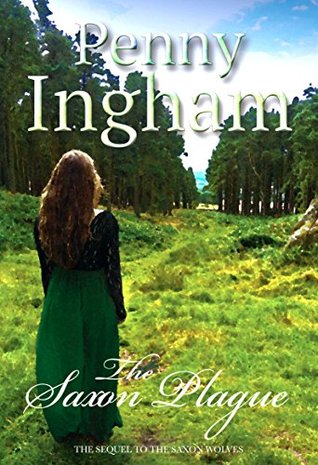 I would’ve never heard of these books, if it’s not for the blog tour, organized by Rachel.

I could read the first volume for the purpose of the blog tour, but the sequel was my own purchase from Amazon. (I think so far only a Kindle version exists.)

I was eager to find out how the story further unfolds, and I wasn’t disappointed: the sequel was just as exciting, adventurous, yet character-centered as the first book!

Maybe a little bit more war/battle scenes happened than in the previous volume, which showed how violent and chaotic these times were. Even in spite of this, the emotional side of the story was also strong, and I felt for all the characters, let them be good or bad. Actually, that’s what I like about them so much: they’re well elaborated, neither of them black or white, but somewhere on the grey scale. I also love how Anya, and probably at least some of the other characters learn more and more about how life and people are like this.

I was sucked in the world of the book the moment I started to read, and I felt like part of me was still left in there after I finished reading it. The atmosphere is almost touchable. It’s part very realistic, the way you feel you could sense the place the same way today as you could’ve centuries ago, and it’s part ancient, almost fantasy-like, like it’s set in another world (which makes sense if you think of how little we know about these times, and how most of our knowledge springs from ancient objects and legends). It made me want to wander these places it pictures.

It’s a very good representation of the genre, just as the first book. (Well, to be honest I can’t even think of them as two separate books. It’s one story, they belong together. It’s more like two parts of one story, and not to volumes of a series…)

1. If you read ‘The Saxon Wolves’, it’s a must read! Don’t let Anya’s fate just hang in the ether.

Because the two books give off the same vibe, I don’t want to change what I already chose: rosé spritzer it is!

Again, any instrumental music you can find would go with it.

I don’t know if the author plans to continue this series (a trilogy would make sense I think), but I’d love to follow Anya’s story forward! There’s clearly an opening for that: I wouldn’t say the story ended on a cliffhanger, it didn’t exactly…the actual story is closed. But there are things that didn’t have a solution, and plot lines that didn’t get a closure, so I guess another book could come one day. Clearly there’s a possibility for that.

I hope one day there would be one!

Have you read any of these two books? What did you think?

3 thoughts on “‘The Saxon Plague’ by Penny Ingham”