‘Life, Death And Cellos’ is a book about amateur musicians, and how could I have said no to that? I agreed to a blog tour before I read the book – the tour ended up being a three-day blitz, but who cares? I have the same job in it! 😀 Music is my soft spot, and of course I decided to take this book ahead of my TBR. I’m always in the mood for some quick musical read!

Let’s see what it’s all about! 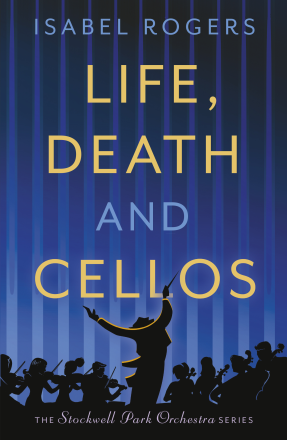 Classical music can be a dangerous pastime…

What with love affairs, their conductor dropping dead, a stolen cello and no money, Stockwell Park Orchestra is having a fraught season.

After Mrs Ford-Hughes is squashed and injured by a dying guest conductor mid-concert, she and her husband withdraw their generous financial backing, leaving the orchestra broke and unsure of its future. Cellist Erin suggests a recovery plan, but since it involves their unreliable leader, Fenella, playing a priceless Stradivari cello which then goes missing, it’s not a fool-proof one. Joshua, the regular conductor, can’t decide which affair to commit to, while manager David’s nervous tic returns at every doom-laden report from the orchestra’s treasurer.

There is one way to survive, but is letting a tone-deaf diva sing Strauss too high a price to pay? And will Stockwell Park Orchestra live to play another season? 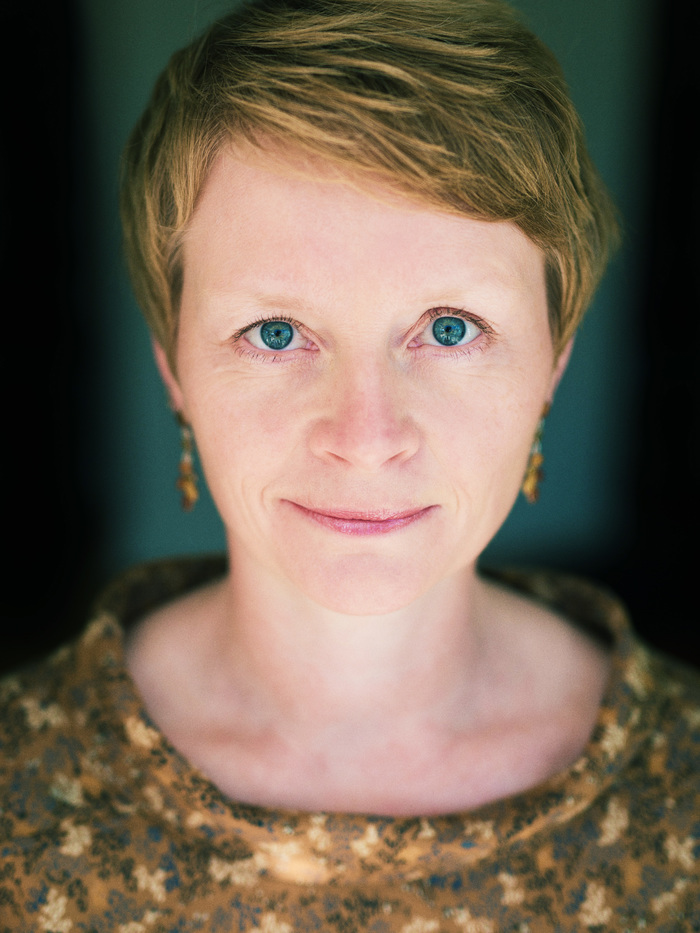 Isabel Rogers writes poetry and fiction, but never on the same day. She won the 2014 Cardiff International Poetry Competition, was Hampshire Poet Laureate 2016, and her debut collection, Don’t Ask, came out in 2017 (Eyewear). Life, Death and Cellos is her first novel to be published. She had a proper City job before a decade in the Scottish Highlands, writing and working in the NHS. She now lives in Hampshire, laughs a lot, and neglects her cello.

I was contacted by the publisher if I’d be interested in being part of the blog tour they were planning. The book sounded one exactly to my taste, so I immediately accepted the offer! Then I forgot the exact title, so a couple of weeks after this happened I downloaded the book from NetGalley, too. On accident! Can you imagine…? Anyways, we can clearly note that the description got me very interested! So, this time my disclaimer says…. I got this book directly from the publisher for the purpose of this book blog blitz AND via NetGalley… of course, in exchange for my honest opinion.

First of all, I have to make something clear: when I got this book (both via email and on NetGalley) the description and genre of the book, even the cover stated that it was a mystery. That was part of why I was attracted to it, and I would be dishonest if I said that this in no way influenced my opinion. Why, would you ask?

Because this book is everything but a mystery. I don’t say it as something bad, it’s merely a stating of a fact. And it wouldn’t be a problem, even for me (a huge mystery fan) – but the initial concept clearly claimed that it was one, thus turning my expectations that way. What after all saved my reading experience was, however surprising, my genius-level procrastination, and the fact that some things happened faster in my life than expected, and I found myself a bit behind with my reading: I only started to read this book a couple of days before my blog tour date. So, when I added the novel to my ‘Currently Reading’ shelf on Goodreads, there were already a couple of reviews up that talked about not getting why this book was labelled a ‘mystery’. That’s why I double checked the NetGalley page and my email (I remembered it as a cozy mystery series debut, too), and realized that while the first email I got clearly said this book was a cozy mystery, this genre was already deleted from the NetGalley page.

That’s how I decided to try to clear the ‘mystery’ label from my mind, and read this book as something else: a light-hearted contemporary story about an amateur symphonic orchestra. I know I didn’t completely succeed, but hey, I tried my best. I’m pretty sure the reason there are some more negative reviews is that that on account of mislabeling the genre this book haven’t found the right audience it deserves. Now, I get that this all happened before the publication, and it has been corrected by the time it comes out (now), which is absolutely alright, so I try to focus on which readers should read it, who might find it interesting – instead of criticizing the lacking mystery part.

To be honest, I’m not even sure how I would categorize this book. If I must say something, I’d say it’s a contemporary general fiction… dealing with musicians. Or musician’s lives. () It’s currently marked as ‘humor’, but I’m not sure that fits that well, either. There are humorous situations, and it’s a light read, but I don’t think that’s the most characteristic attribute to the book. There’s the so-called mystery of the stolen cello, but that only happens around the half, and doesn’t really keep going more than a couple of chapters – and nobody seems to care who took it, it just gets found, and that’s it. So, it’s definitely not a mystery, either. The main character is a young woman, finding herself in the music and in the life of the orchestra, but there are many other, almost equally important characters of different ages and gender, and we get to see many of their POVs as well, so I neither can say it’s women’s fiction, nor new adult… It’s so hard to grab and put in an exact category! I give up trying…

Anyways: the point is, this was an entertaining story about the life of an orchestra, though it was predictable, too. What I enjoyed the most, and I think the strength of this book is how their life, the life of amateur musicians and singers is described. It’s very well described, in small, numerous details, which sometimes takes the reader’s attention from the actual story – but I didn’t mind this at all, because I honestly think this was the best about the book! It’s very well captured, even the tiniest details, and – I say this from experience – so very accurate! So, dear reader, if you go through the pages of this book, know that every single thing about these orchestras and choirs are really happening this way. This is how it goes. I loved these descriptions!

I also liked the characters, though I feel like I would’ve liked to know a bit more about them. See a bit more. They were good enough to be interested in, but I didn’t feel it was enough. Fortunately, this is only the first book of a series, so I really hope I get to know them in the sequel more! This is probably also the reason why some minor arcs in the book weren’t closed by the end: the author was thinking in larger arcs, in a series, not in a standalone book. Regarding only this book, I must say that the members of the orchestra were just as spot on as the description about their life: the “types” of amateur musicians were all very well described and represented. Since there are many equally important characters, there weren’t enough time for all of them to be wholly introduced and thus some of them didn’t seem to have as much depth as others, but I think that can be okay if the sequel gives a bit more “screentime” for them. Erin was likable, I loved Ann, and I would be so up to see way more of Charlie!

The way the orchestra is describe, all the details so accurate, the background facts about the music they’re playing… this is the true strength of this novel. This is what makes it believable and interesting.

People interested in music and in the everyday life and habits of amateur musicians. I think you’d be especially entertained with this one if you yourself are one! I found many observations funny and right on spot! This book is also a good choice if you’d like to just lightly read something that manages to keep your interest, but not making you feel so anxious and worked up so it just adds to your daily stress. It calmed and switched off my mind a bit.

Just for heaven’s sake, don’t expect it to be a mystery!

Cold beer, coming in a pint, preferably in the company of a couple of people. (Well, that’s probably something you can’t do while reading… anyways, that’s what came to my mind.)

I’d go with what the orchestra’s playing in the book: Bach, Strauss… but anything symphonic might be of similar effect.

I want to read the sequel to see what it all develops into.

Please, check out the other stops of this blog blitz! 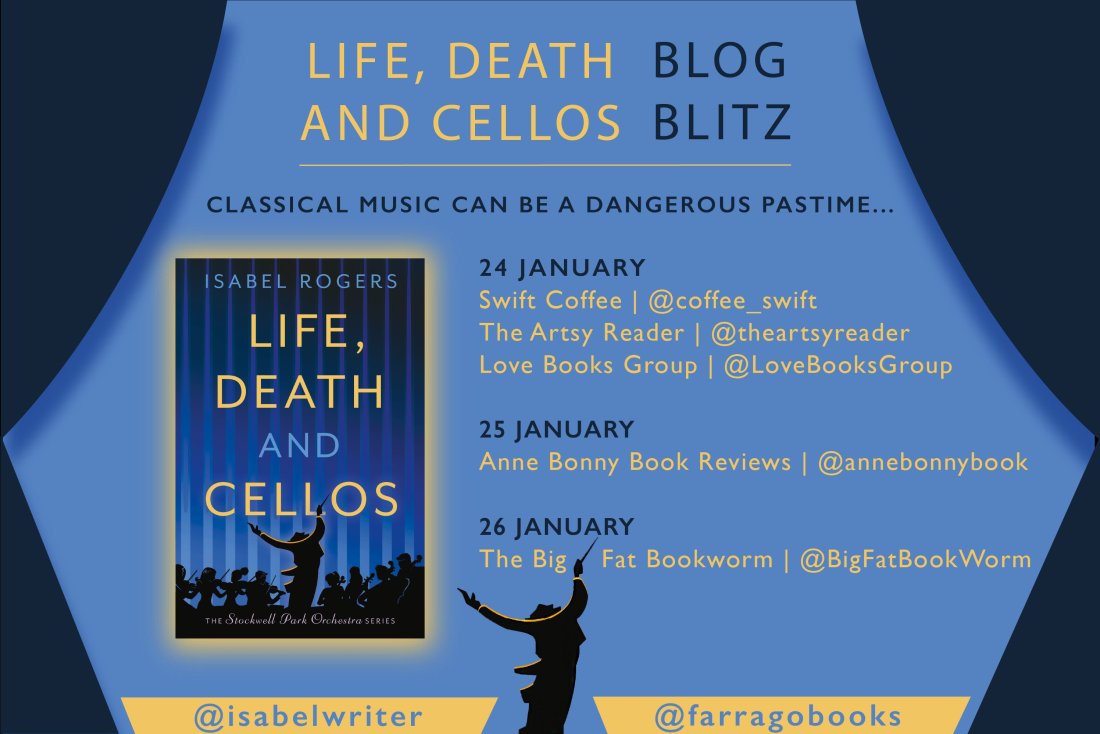