A soft blanket, a hot beverage, a nice autumn day and a cozy mystery set in my beloved Paris… it’s all set to a wonderful reading time!

Or so I thought…

I got this book from NetGalley and Thistle Publishing in exchange for my honest and unbiased opinion. 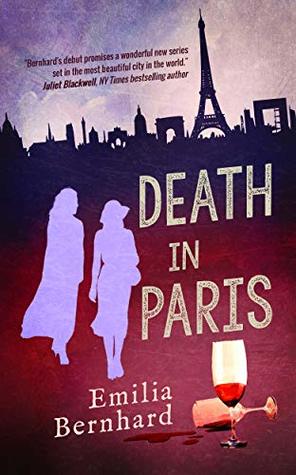 As stated above, I got this book from NetGalley. It was part of my ‘Read Now’ binge a couple of weeks ago. I saw it was a mystery and set in Paris, so obviously I wanted to read it. (Well, if you know me it’s obvious… otherwise, here I tell you: I’m a huge fan of both.)

I have to say I’m disappointed with this book. I expected a great mystery plot – great and not simply ‘average’ because of the premise – the murder described in the blurb and also the first chapter set me up for expecting something very original. Like, drowning in a bowl of soup? Have you seen anything like that? Because I certainly haven’t. Beyond this, I really didn’t expect much – some quirky characters and a strong Parisian atmosphere, maybe.

I feel like I’ve been cheated at all of these.

Now, we could say that it’s just me and I’m very curious about your opinions, because I’ve seen way more positive reviews than negative, or even average ones. But honestly I can list some things that I think are not so subjective to see in a certain way, and I saw a couple of people who wrote about them in their reviews as well. What perplexes me is that they are obviously the minority – we are, I should say. So, feel free to disagree with me (as always), but please, give me some points and reasons what makes you feel like this book deserves more credit than I give it.

Starting off with the relatively smaller things: I never for a second felt like any of the characters were real. The two main characters, the self-titled amateur detectives, Rachel and Magda were cute and I see how they could be a fantastic pair, but sadly, in this execution, they simply weren’t. They’re a nice pair, sometimes funny even, but they just didn’t come off as whole persons. Not to mention the others… some of them were simply a cliche – the poor student girl working because she wants to get through university, the snobbish, money-eyed and arrogant but classy ex-wife, the butler, the kind of vulgar girlfriend, the first repulsive but then overly-friendly police officer… And then there were some that weren’t even a cliche – like the husband, who was used whenever he was needed for something and then conveniently disappeared.

The book didn’t give me that sense of Paris, either. There are relatively long descriptions of the city and its people, but I felt like they were a bit forced. Bringing back that atmosphere wouldn’t be so hard, since I’ve been there several times and I have some French acquaintances, and I love to reminisce… or so I thought. I was actually surprised when I read the acknowledgements and it turned out that the author had actually lived and researched in France for a while. It had me question everything I thought. Reading this book I was sure it was built on the usual stereotypes of Paris and the French. Maybe if the main character (and the other Americans in the book – which is the majority of the characters) had been living in France for only a couple of months or years, all these might be plausible. But after 20+ years! No way. Nobody is that superficial. She is not described as someone that shallow, either.

This is a slow-paced novel and that would be okay with me, but from the very beginning I felt like something with the style was off, and it didn’t make me feel like time was passing faster. It took time to get used to it, and even after I did and the pacing got better, it didn’t feel quite right. I don’t say it was bad, because it wasn’t, really, but the narration was repetitive and there was basically only telling, not at all showing. A nice, old-timey atmosphere was created, though, and if that was intended, then this worked perfectly. Unfortunately, to me it worked TOO perfectly. Somehow the style and the atmosphere didn’t match the time and world the novel is set in. If it was set like 50-100 years ago, it would’ve worked for me better. I couldn’t believe it’s today, though. It didn’t work out with either the place or the characters. For a long time I didn’t understand why, but I felt like Rachel and Magda were somehow older and at the same time younger than they actually were. They just didn’t seem like modern 40-odd year-old women. Then I realized it’s because of this. They seem like ladies their age half a century ago, or maybe even a bit before that. They think old-fashioned and they’re extremely naive. Okay, I’ll be blunt here: at times, they’re outright dumb. The Paris in the book didn’t feel like today’s Paris either. It felt like the Paris of slower, simpler times. This atmosphere was so strong that at times, when I almost forgot myself in the novel, the thing that kept me from it was that suddenly a cell phone or the internet was mentioned – and I was abruptly reminded that this all happened these days, and it kind of ruined even those things that otherwise would’ve worked for me.

Last but the most important part: the plot! The story! That was the biggest disappointment for me about this book. The promise of an awesome, unique story was what kept me reading all the while, it made me think that it’s worth it, it made me expect something more even after I realized that regarding every other area this book is ‘only’ an average mystery for me. The problem was, it started on the high point: drowning in a bowl of soup. What an idea! Many people with half-motives. Anything can happen. Anybody could be the murderer. It had such potential! My rating of the story definitely started from 5 stars… then as I was reading it slowly got lower…and lower… but I still kept waiting for a bombastic plot twist that would meet my expectations and would make this story as original as it had sounded. And then at the ending I wasn’t surprised or impressed at all. It’s not that the final twist and the person of the murderer were so obvious. They were and I guessed everything fairly soon, but that’s not something that always bothers me. If it’s a good idea and it works, it’s fine by me, but this was also such a cliched solution! The actual surprise came when I realized that according to the acknowledgements the story was based on real events (though they actually happened centuries ago, so maybe I wasn’t that wrong with sensing some trouble with time period compatibility). It doesn’t mean similar mystery cases weren’t written before, though.

To be fair, there were things I liked, too, like the playful friendship between Rachel and Magda, Rachel’s love for books, or the way they watch and refer to all those detective shows… it’s a great idea that they start to investigate because they feel like they’re capable of doing it after so many times spent trying to solve fictional crimes. I think that’s something a lot of us can relate to.

Drowning in a bowl of soup! That’s something original for sure. Otherwise, this is quite a stereotypical case of mystery novels. Like, a copy of the prototype.

If you are a HUGE fan of cozy mysteries, but not a die hard fan of all the subgenres of mystery and thriller, you maybe should give this one a go! It’s probably not as bad as it sounds according to moi, and more people seem to like it than not, so… It’s maybe just me. If you like naiv and slow-paced, this one is for you!

A glass of rosé. And I’m not even trying to make a joke here.

In spite of how bad my opinion might seem about this book, I do think that the next installment(s) in the series might be worth reading. Especially since this is a debut novel – and I admit that most of my problems with it were more about the execution that the actual idea.

Have you read this book or do you have it in your TBR? Please, share your thoughts with me!

Also, how often do you feel like you have the exact opposite opinion than other readers? How do you manage this? How does it make you feel?

Can’t wait for your replies!

19 thoughts on “‘Death In Paris’ by Emilia Bernhard”