Today’s Halloween, so it’s only natural if one shares a review that’s somewhat spooky. This one that I’m writing about, ‘Cold Fire’ is not one that can be without hesitation categorized as ‘spooky’, but it has a weird, otherworldly and magical atmosphere that I felt it would be perfect for today. So, bring your coffee and read about my experience with it!

I got this book via a giveaway directly from the author, with no obligation of writing a review, so this is my honest and unbiased opinion, as always. 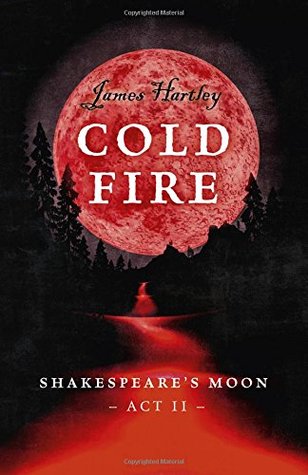 I happily announce that this is the first giveaway that I’ve ever won! I was so excited to get the author, James Hartley’s e-mail about it! He was very nice, and I got this beautiful paperback (that cover’s so stunning, isn’t it?) in the company of a pen very soon by post. A wonderful experiment, especially as an international blogger!

After finishing the book I had a strong feeling of ‘I don’t know what I’ve just read’. I couldn’t even decide if I meant it in a good way or in a bad way. I decided to review it at least a day later because I felt like this all had to settle a bit inside me before I can express everything I think and feel about it.

After a day given to thoughts, I think this was because this book creates such a strong atmosphere, and it’s one that I felt a bit weird, if not uncomfortable in. I know this probably doesn’t sound good, but I honestly mean it in the best way possible. There’s a magic in this book that’s wonderful and somehow creepy at the same time. It’s perhaps because it’s used for not-so-good things in this particular novel. The workings of this magic (I mean it’s actual magic!) were at times foggy for me, but I think the reason is that I haven’t read the first volume in the series. It’s supposed to work out separately and it does, I understood everything, but I think I would have felt more comfortable in it (yes, I imagine myself getting lost in books…literally) if I read the ‘Act I’ before. The story was all clear even like this, though.

The absolute best thing about this book is that it’s so eloquently written. I also like the idea of in a way ‘remixing’ Shakespeare’s plays, yet remaining by the utmost respect for his work and person. This book kind of rewrites Romeo and Juliet, yet it gives an interesting insight to it and it’s way more than merely retelling the original story. It mixes history with the present, old ways and modern, our normal world with a magical one. I loved to see some lines that are a modern wording of the original play, but I also loved that it was only a small part of the book, so it didn’t lack originality. It didn’t lack it at all! I have to admit, though, that I found the story a bit weird and I’m not sure that things that worked back in Shakespeare’s time are things that are believable to be happening nowadays. I get the purpose of ‘insta-love’ in this case, of course, this story is centering around R&J! I get that. I’m not sure I’ve ever been a 100% okay with the original play regarding this, either, so that might be my problem here. I know these are naiv, passionate and crazy teenagers running around, but I couldn’t really identify with their feelings and acts even when I was a naiv, passionate and crazy teenager myself. But that’s just something I have to go with in this case, I can’t blame the original story on the retelling, can’t I? And this is a very well worked-out book.

While I found the story and the book in general a very good work, the characters fell a bit flat for me. They weren’t bad, I could see something in many of them, but they weren’t the best of this book. Also, I several times felt like the kids’ problems and thoughts are a little stereotyped and I think at times my tween self would’ve found herself lectured. It wasn’t really such big of a deal, only happened one or two times but I felt like I should mention it. I’m also not sure how I should categorize this book: YA or tween or what? It’s aimed at teenagers, I think both in later and earlier years of ages, and the main characters are far from growing up, but this book had a darker atmosphere than usually books aimed at tweens have, so I go with YA here. It was perfectly enjoyable as an adult, too!

I love the idea of making Shakespeare more popular with teenagers, and this book is one I think can achieve that goal. At least with many teens, I guess.

If you love Shakespeare and fantasies, give this one a go! I think you won’t be disappointed. Especially if you like R&J. (I enjoyed it, but R&J is not my favorite Shakespeare play, so I think I’d probably enjoy the first volume in the series more.)

‘Familiar Taste of Poison’ by Halestorm

I’m very curious about this series! I already bought the first volume, ‘The Invisible Hand’ in Kindle format on a sale, and I can’t wait to find out what other play will the author elaborate next time.

Do you like Shakespeare? Did you like it as a teen? Which one is your favorite play? Let’s discuss in the comments section!

One thought on “‘Cold Fire’ by James Hartley”